This motor yacht IROQUOIS is a superyacht of large proportions. This 50 m (164 ft) luxury yacht was made by at The Feadship De Vries Shipyard in 1998. Superyacht IROQUOIS is a beautiful yacht that can accommodate up to 10 passengers on board and has a total of 11 professional crew. The firm of naval architecture responsible for the design details for this ship was De Voogt Naval Architects. Glade Johnson/Marian Smith was the one who saw out her interior design.

The yacht's general design work came from De Voogt Naval Architects. The formal naval architect intellectual property are the work of De Voogt Naval Architects. Motor Yacht IROQUOIS received her stylish interior designing from the interior design skills of Glade Johnson/Marian Smith. the Netherlands is the country that The Feadship De Vries Shipyard completed their new build motor yacht in. After the official launch in 1998 in Aalsmeer the boat was afterwards delivered on to the proud new owner having completed final finishing. Her hull was constructed with steel. The motor yacht main superstructure is fabricated predominantly using aluminium. With a width of 9.6 m / 31.5 ft IROQUOIS has spacious interior. A reasonably deep draught of 3.02m (9.9ft) limits the number of worldwide harbours she can visit, taking into account their specific characteristics. She had refit improvement and changes completed in 2006.

This ship is powered by twin efficient CATERPILLAR diesel engine(s) and can accelerate to a impressive top speed underway of 17 knots. The main engine of the yacht creates 1370 horse power (or 1008 kilowatts). Her total HP is 2740 HP and her total Kilowatts are 2016. Coupled to the IROQUOIS engines are twin screw propellers. For stabalisers she uses Vosper. As for bow thruster maneuverability she was fitted with Jastram. Her quick cruising speed is 16 knots which makes a range of 4700.

Apportioning room for a maximum of 10 yacht guests sleeping aboard, the IROQUOIS accommodates everyone comfortably. She also has room for approx 11 professional crewmembers to run.

In October 2009 IROQUOIS visited Montauk, in United States. IROQUOIS has cruised the waters encompassing Suffolk County during the month of October 2009. Heinen & Hopman is the type of AC employed in the interior. This motor yacht has a teak deck.

The luxury yacht IROQUOIS displayed on this page is merely informational and she is not necessarily available for yacht charter or for sale, nor is she represented or marketed in anyway by CharterWorld. This web page and the superyacht information contained herein is not contractual. All yacht specifications and informations are displayed in good faith but CharterWorld does not warrant or assume any legal liability or responsibility for the current accuracy, completeness, validity, or usefulness of any superyacht information and/or images displayed. All boat information is subject to change without prior notice and may not be current. 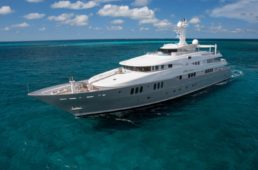 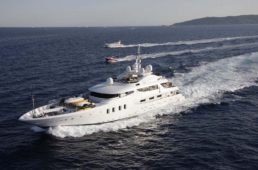 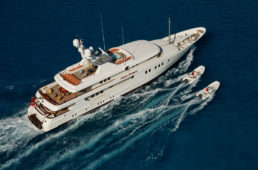 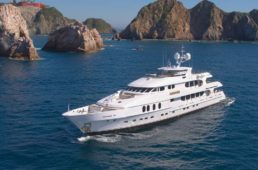 Powered by Your Inspiration Themes